Artist: Someone Who Isn’t Me

Music unites with cinema in an absolutely feminine affair!

The new album of Someone Who Isn’t Me (aka SWIM), titled “Amygdala”, is released by United We Fly.

“Amygdala” is the original soundtrack of the short film “AMYGDALI” which was recently awarded with a special mention of original music at the 44th Drama International Short Film Festival. “AMYGDALI” is written & directed by Maria Hatzakou, drummer of SWIM, while at the same time Marilena Orfanou, lead singer of the band, composes the original score. SWIM present an outstanding original soundtrack, influenced by John Carpenter, Air, Cocteau Twins, Angelo Badalamenti and 80’s pop.

“Amygdala” comprises the three songs heard in the movie, two additional instrumental tracks, as well as a surprise bonus track!

“Amygdali. Do you know what it is?”

Two sisters, Anna and Melina, spend the last days of summer at their summer house in Nea Makri.
Anna is having a party for her 18th birthday and all she wants is to spend the day with her summer flirt, Maria.
Melina loves Anna obsessively and she doesn’t understand the reason she isn’t invited to the party. But she knows that as a party crasher she can make this night unforgettable for her big sister. 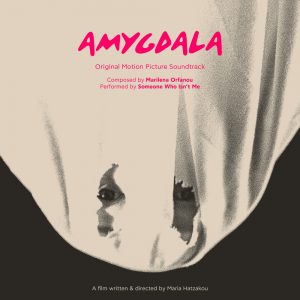